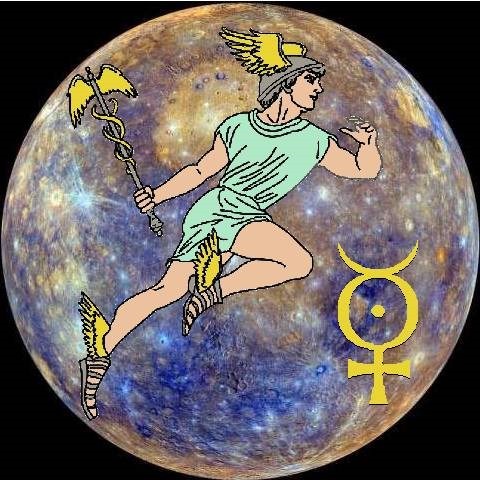 Posted at 06:39h in Astrology, Blog by Tony Hyland
Share

In astronomical terms, Mercury is the closest planet to our solar system’s sun. As such, it moves around the sun faster than any other planet in the system in what is known as an eccentric orbit.

The speed at which this planet moved across the sky at night was noted by ancient Roman astronomers, who subsequently named it after their swift-footed messenger god (which is why it is often referred to as the ‘planet of communication’ in astrology). Until NASA’s Messenger space probe reached and completely mapped this rather elusive planet before impacting on its surface in April 2015, very little was known about it. Today, we know that this celestial body is far more dynamic and complex than its eccentricity and swiftness previously allowed us to discover.

Every astrological sign has a planetary ruler, and most ruling planets reign over a single sign. Mercury, however, is the planetary ruler of both Gemini and Virgo, making it one of only two planets that divide their attention between two signs (Venus, which reigns over Libra and Taurus, being the other one).

There are some basic similarities in the way Mercury rules over Gemini and Virgo. People born under both of these signs are, for instance, exceptionally intelligent. They can also be very flexible and capable of ‘changing like the wind’, although this is mostly due to the fact that both Gemini and Virgo have a ‘mutable quality’.

Every astrological sign is assigned one out of three qualities. These qualities and the signs they are assigned to are:

For our purpose here, it is sufficient to say that the role of mutable signs is one of preparation for transitions and acceptance of the need to move on. Common traits include flexibility, communication and destruction.

There are, however, also some subtle differences in the way Gemini and Virgo are ruled by Mercury. It does, for example, tend to leave Gemini natives wanting variety, as well as the ability to freely flit from one curiosity to the next, whereas it leaves Virgo natives seeking an organised approach to life.

Mercury also has them channelling their intelligence in very different ways. Gemini natives can, for instance, talk about many different things and convince you that they are professionals in all things. Virgo natives, on the other hand, are excellent at targeting their audiences with information on specific subjects in an organised, educable and precise manner.

As a whole, it can definitely be said that, just like their planetary ruler, Gemini and Virgo natives are far more complex and dynamic than is apparent at a first glance. A personalised birth chart can provide a much greater insight into the characteristics and potential of people born under these signs. Why not order one now?