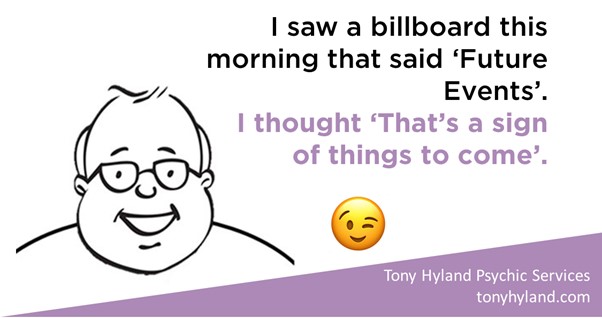 Posted at 05:00h in Blog, Other Interesting Blogs by Tony Hyland
Share

The World needs a laugh right now. I’m not sure these will help but here are the best psychic jokes ever… (maybe)

I regularly post on Facebook and Twitter and sometimes throw in a joke – some are brilliantly terrible, but I hope to at least make one person smile! Here, I have collected my favourites, I hope you enjoy. Not to brag, but I have sychic powers (for example, right now you’re thinking ‘It’s psychic, you idiot’!)

One of my friends started to work as a psychic, but he gave up… He couldn’t see any future in it

Where do fortune tellers dance? At the crystal ball

I will be posting telepathically later today. So if you think of something funny later, that was me

I punched a clairvoyant who was laughing at me once. I like to strike a happy medium

Where do fortune tellers go on vacation? Palm Springs

I saw this notice at a metaphysics shop the other day: ‘Out of body, will be back in 15 minutes’

Why did the psychic refuse to board the Titanic? Because it was too large, he wanted to board a medium ship

Did you hear about the psychic who was arrested for possession of marijuana? In his defence, he said he was ‘just a happy medium’

What did the client say to the funny tarot reader? You’re such a card

Did you hear about the woman who was told by a psychic that her husband would meet a violent end soon? She asked if she would be acquitted

Did you hear about the man who was told by a psychic that lots of money was coming his way? He was hit by a Securicor truck that afternoon

What is a psychic’s favourite game? I spy with my third eye

What is the world’s longest astrology reading? I don’t know but it’s on a planetary scale

What do you call a funny psychic? A comedium

I would of course like to apologise for most, if not all, of the above! I hope at least I raised a groan, or better still a smile.