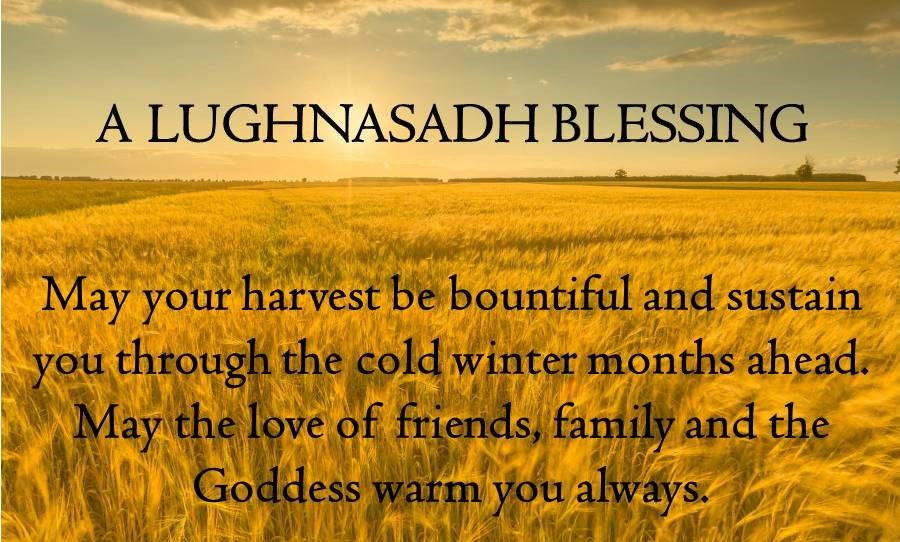 Celebrated on the 1st of August (Northern Hemisphere; Southern Hemisphere: 2nd of February), the Lughnasadh Festival pays homage to the Sun god Lugh, the god of light and fire and patron of horses, and his wedding to the Earth Goddess, the goddess of fertility.

It was their wedding that was believed to cause the ripening of crops, the first fruits of which were ready to be harvested by August. Also often referred to as the blacksmith god, Lugh, the Shining One, was associated with the Sun, agriculture and social skills, as well as being seen as the inventor of the arts. The latter two also led to Lugh being associated with the god Mercury.

The Story of Lughnasadh

During the festival, bards would tell spellbound crowds the story of Tailtiu, Lugh’s stepmother, who worked so hard on clearing the great forest to provide fertile land for farming that on finishing, she collapsed and died of exhaustion. It was said that honouring her dying request for funeral games to be performed in her honour each August would ensure that there was peace, fair weather and milk and corn in every home.

Ritual enactments of Lugh and the Earth goddess mating were undertaken. Representing the age-old covenant between man and god, a covenant that guaranteed the continued connectedness between the land’s fertility and the fertility of the community and the people therein, these enactments were accompanied by cheering crowds, rejoicing and processions winding their way up to hilltops in celebration.

Funeral rites for those who had passed away were held, too, and Chief Druids performed hand-fasting rituals, trial marriages where young couples committed themselves to live together for one year and a day to see whether things would work out between them.

Lasting for a full week, celebrations included horse races, mock battles, warrior gamers and a variety of other contests and competitions. Many of the fruits, grains, herbs and seeds gathered and dried at this time are sold at the fair. At sunset, fires were lit and burning wheels were rolled down hillsides towards rivers to symbolise the year’s descent towards Winter.

Bread was baked and broken to honour those who had tended the grain and harvested it. Transformed into food by man’s skilful hands, the harvested barley, corn and wheat where reborn in the form of loaves.

The Meaning of Lughnasadh

Autumn is the time to gather wisdom and recognise how important the seeds planted by us are. The message basically is that whatever we sow, we will reap.

Today, we celebrate the festival by making and sharing home-made bread with family and friends; making lists of both our failures and achievements in recognition of the fact that we reap whatever we sow; renewing our commitment to our partners and contemplating the concepts of completion, harvesting and transformation. In doing so, we recognise that by letting go, we will also receive.

How can I help? Please take a look at all my Psychic services available, including phone, Skype and email readings .