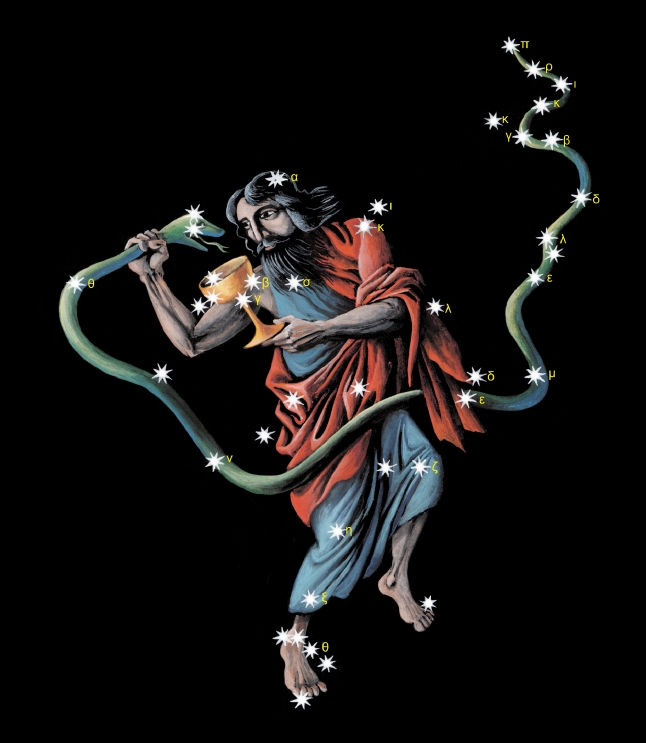 The twelve traditional zodiac signs are well known; ask even a sceptical person and they are likely to know the star sign they were born under. However, every so often, you may hear a suggestion that there is another, lesser known, zodiac sign; Ophiuchus.

The constellation Ophiuchus, the serpent-bearer, was listed by Ptolemy in the 2nd century, and its astrological significance has been noted at least as far back as 10AD, when it was described in the poem Astronomica by Marcus Manilius. He described an eternal struggle between Ophiuchus and the serpent, each matched in power.

The idea that Ophiuchus should be one of the zodiac signs seems to have originated in the 1970s, with Stephen Schmidt’s proposal of a fourteen-sign zodiac – the 14th being a constellation called Cetus. A thirteen-sign zodiac with only Ophiuchus added was proposed again in 1995 by Walter Berg and Mark Yazaki, and the idea has gained some traction, particularly in Japan.

It is, therefore, a modern idea and not one that is accepted by all astrologers. The difference is in whether the astrologer uses the sidereal or tropical form of astrology.

In tropical astrology, there are twelve signs (aligning with the twelve houses over which they rule) beginning with Aries at the Vernal or Spring Equinox and proceeding in equal parts. This form of astrology connects strongly with the year as we observe and experience it.

In sidereal astrology, the sun’s progression against the fixed stars is more precisely observed; the sun does in fact travel through the constellation of Ophiuchus after leaving Scorpio and before entering Sagittarius, between the 29th November and 17th December. This is why it is often considered notable by sidereal astrologers. The issue with sidereal astrology, for many tropical astrologers, is that the sidereal year is some 20 minutes longer than the year as we observe it, meaning that the signs gradually, over the course of centuries, lose their places in the year.

The fact remains that, although your sun sign or star sign can provide some broad insights, it is only one small part of your horoscope – and as the aspects of Ophiuchus are in many ways similar to those expressed by Scorpio and Sagittarius (the signs which it overlaps). Therefore, whichever form of astrology you prefer to use, it is important to look at your complete horoscope for a deeper understanding.

My team and I offer a range of ways to seek understanding about yourself or your circumstances; from psychic email readings to personalised astrology reports. Simply order online, or call on one of the numbers at the top of this page.