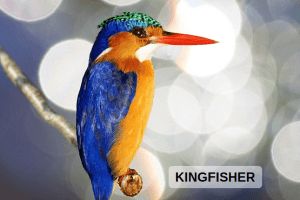 Posted at 07:27h in Blog, Spirituality by Tony Hyland
Share

Augustus Caesar, Rome’s first emperor after the assassination of Julius Caesar, completed his predecessor’s calendar reform by also naming a month after himself. Thus meaning ‘Augustus Caesar’s month, August has, like other month, many spiritual symbolisms and meanings. Here are some of them.

Spiritual Symbolisms and Meanings of August – The Kingfisher

Also frequently referred to as the Halycon, it is surrounded by many superstitions and legends, many of which originated in ancient Greece.

Greek mythology has it that Alcyone, the daughter of Aeolus (the ‘King of the Winds’) threw herself into the ocean after finding her husband drowned. Her devotion was rewarded by the gods, who turned her into a kingfisher. Her father then prohibited the blowing of winds during the ‘Halcyon Days’, the 7 days before and after the winter solstice (when, according to legend, the kingfisher female lays its eggs).

The kingfisher is associated with:

It is also said to be beloved by Greek mythology’s sea nymphs (spirits of nature and minor female deities said to be protectors of springs, rivers and mountains).

The two birth stones for August are the Peridot and the Sardonyx.

Occasionally referred to as the ‘Evening Emerald’ due to its light green colouring, the Peridot (found within volcanic ashes and once believed to be the tears of Pele, the volcano goddess) symbolises strength and is said to help bearers:

When this precious stone is set in gold, it is also said to protect wearers against nightmares.

Equally a stone of protection and strength, the Sardonyx is believed to bring stability and lasting happiness to partnerships/marriages and attract good fortune and friends. It is thought to be useful in enhancing integrity, stamina, vigour and willpower.

August has two flowers associated with it, namely the Gladiolus and the Poppy.

Named after its leaves’ shape, which resembles a sword – or ‘gladius’ – the Gladiolus is said to have been the symbol of Roman gladiators and represents love at first sight, splendid beauty, preparedness and strength.

A native Mediterranean species of Poppy yields opium, a substance used to bring on sleep and ease pain in the ancient Mediterranean world. Ancient Greeks did, in fact, associate this flower with Morpheus (god of dreams) and Hypnos (god of sleep). The opium-derived drug morphine we use today owes its name to Morpheus.

The four trees linked to August are the:

All in all, August is a month of strength and protection; a month good for love, marriage and partnerships and a time to explore your inner visions and true inner self. Allowing you to bring light into your ‘darker (negative) side’, it is also a month of transition into that which is lighter and more positive.

Get a look ahead into what this month may bring for you in terms of love, relationships (both personal and in business) and more by ordering a one-month Astrology forecast today.