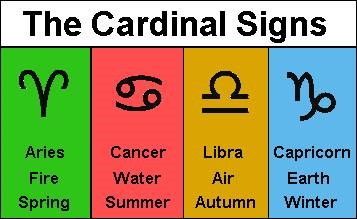 Posted at 07:34h in Astrology, Blog by Tony Hyland
Share

Having introduced the concept of ‘Qualities’ in ‘Astrology Reports: Qualities, an Introduction (Part 1 of 13)’, I will endeavour to show how the different qualities, cardinal, fixed and muted, affect each individual sign over the next 12 parts of this series, starting today with the first of the cardinal signs, Aries.

Astrology’s cardinal signs, their seasons and elements are Aries (Spring, Fire), Cancer (Summer, Water), Libra (Autumn, Air) and Capricorn (Winter, Earth). As I mentioned in Part 1, these signs occupy each season’s first month. Also known as the Zodiac’s ‘scout signs’, they have the role of bringing forth new seasons. Governing creativity and often respected as leaders within their communities, people born under these cardinal signs are typically self-motivated; ambitious, active and often restless individuals. Occasionally misinterpreted as domineering, cardinal sign natives have some outstanding qualities, including being enterprising, creative and independent; spontaneous and, yes, sometimes forceful.

The Cardinal Quality of the Fire-Sign Aries

The role of the Aries individual is to use his or her first-hand experiences to project themselves onto the world. Self-expression is, in fact, of paramount importance to the pioneering sign of Aries, and natives love to see just how far they can go in the exploration and discovery of and experimentation with the world surrounding them.

The element of fire provides Aries natives with a passionate sense of courage and supreme faith in themselves, while their cardinal quality can make them restless. Needing change simply for change’s sake, Aries people are also assertive and will ensure they are known by the right people very quickly by adopting the kind of attitude that says ‘How are people going to notice me unless I draw attention to myself?!’ The ‘right people’ for Aries, by the way, tend to be either highly influential people or those who can introduce them to these people.

All said and done, Aries natives are the daredevils that push progress and those around them forward. When it comes to self-belief, motivation and the ability to ‘get noticed’ by all the right people, we can all learn an awful lot from Aries natives.

In the Part 3, I will take a closer look at how the cardinal quality affects Cancer, the first sign of Summer.