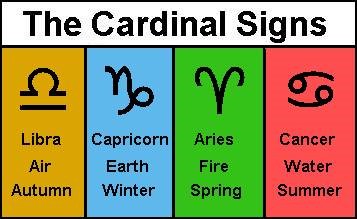 Posted at 07:15h in Astrology, Blog by Tony Hyland
Share

Reigning from the 23rd of September to the 22nd of October, Libra (Element: Air) is the first sign of Autumn. The fact that it is opening up and bringing forth this new season does, of course, make Libra the third in our line-up of Cardinal signs.

Like those born under Libra’s fellow Cardinal signs – Aries (Element: Fire; Season: Spring), Cancer (Element: Water, Season: Summer) and Capricorn (Element: Earth, Season: Winter) – Libra natives are typically active and ambitious; self-motivated and at times somewhat restless. Frequently seen and respected as leading figures within their communities, they are occasionally misunderstood to the point of being seen as domineering.

While Libra individuals – similar to the natives of other Cardinal signs – can at times be rather forceful, they do, however, have many excellent qualities, which include being spontaneous and creative; enterprising and independent.

The Cardinal Quality of the Air-Sign Libra

Libra natives are matchmakers and know exactly how to get things moving by making introductions within relaxed social situations. highly communicative and mixing well with plenty of people, a lone Libra is somewhat of a rarity. Attempting to do anything at all without their ‘other half’ would be bewildering to a Libra.

Doing their best work in team or partnership situations, Libra individuals enjoy bouncing ideas off those around them. Bringing them into contact with like-minded successful over-achievers, their authoritative, active Cardinal quality enables them to quickly create a valuable database of influential associates, contacts and friends. In short, if you wish to advance a favourite project and need to get in touch with the ‘right’ people, talk to a Libra friend about it – they will arrange a lunch or party to introduce you.

All in all, Libra natives can, as cardinals, occasionally be a little bossy. However, as their dominance is typically expressed in the most charming way possible, most people are wrapped quite easily (and sometimes even joyfully) around their Libra friends’ little fingers.

Coming up in August, Part 5 will take a closer look at the last Cardinal sign – Capricorn, the scout sign of Winter.

Would you be interested in your personalised astrology report? Head to my astrology shop to view a wide range of reports available.