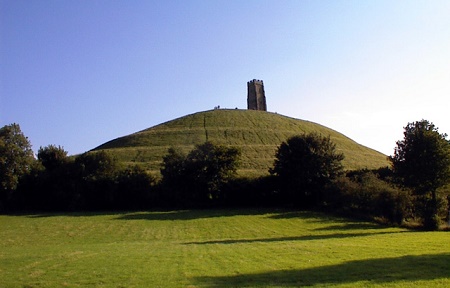 10 May Mystical Glastonbury – the mystical centre for Europe?

Posted at 09:18h in Blog, Other Interesting Blogs, Spirituality by Tony Hyland
Share

Glastonbury could well be considered the mystical centre for Europe, if not the world. Formally known as Ynys-Witrin or The Isle of Avalon, it was a major centre for Celtic Goddess worship and Druids for several thousand years before Christianity.

The Tor, formerly the Celtic shrine/temple for Gwyn-ap-Nudd, God of the underworld and Faery King, which dominates Glastonbury lies on the St. Michael Ley line and has around it a druid maze, still used by modern day druids at the main festival times. There is a ruin of a Christian church at the top. This was originally knocked down by an earth quake, and when it was rebuilt, it was then destroyed by a lightning strike! You could almost assume that Gwyn-ap-Nudd was unhappy about the desecration of the holy site by the Christian pretenders.

In the 19th century the landowners of the Abbey regularly held “explosion parties” where they and their guests would go out late at night and deliberately blow up the ruins! Perhaps the Faery King Gwyn-ap Nudd still has an influential hold over the area?

Glastonbury was until a few hundred years ago surrounded by marsh land, which flooded every winter, in effect causing the town to become an island. The surrounding landscape creates the “Glastonbury Zodiac” A full set of Zodiac figures made from the surrounding geographical features.

Many forms of both modern and ancient worship are present in Glastonbury today, including a Goddess Temple, Buddhist centre and many varieties of Christianity. There are also a wide selection of Druids and various Occult groups that regularly hold both public and private worship.

Glastonbury is a small town of only about 10,000 people, but has a huge percentage of Astrologers, Tarot readers and Healers. Even the National Health Service in Glastonbury offers Acupuncture, Aromatherapy and Herbal medicine! Chinese healing can be found at the Apothecary.

There are numerous shops that specialise in crystals, incense, candles and all the equipment necessary for any form of magical ritual such as wands, robes and numerous books explaining how to carry out various rituals. It is easier to buy magical equipment in Glastonbury than a pair of socks! It is never anything remarkable to see a Druid walking down the High Street in full robes, or a Goddess procession heading up the Tor.