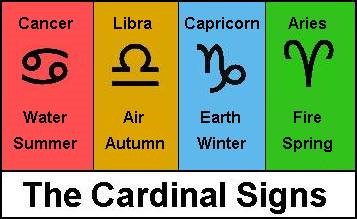 Posted at 07:45h in Astrology, Blog by Tony Hyland
Share

Having introduced the three qualities in Part 1, we established that there are four cardinal, four fixed and four muted signs. In Part 2, I took a look at how the cardinal quality affects its first sign, Aries, the first sign of Spring. Today, I will explore what affect this quality has on Cancer, the first sign of Summer.

As we discussed in Part 2, the cardinal signs – Cancer (Summer, Element: Water), Libra (Autumn, Element: Air), Capricorn (Winter, Element: Earth) and Aries (Spring, Element: Fire) occupy the first month of their respective seasons and are therefore frequently referred to as the ‘scout signs’, the signs that open up and bring forth each new season.

Like those born under Libra, Capricorn and Aries, Cancerians are often considered and respected as leaders of communities. Governing creativity, they are usually ambitious, self-motivated, active and occasionally restless. Sometimes misinterpreted as being domineering, Cancer natives, like those born under other cardinal signs, do, however, have some excellent qualities. These qualities include being creative, enterprising and spontaneous; independent and occasionally forceful.

The Cardinal Quality of the Water-Sign Cancer

The fact that Cancer is both a water-sign and a cardinal sign motivates the Cancerian individual to explore ever new emotional experiences and states. Cancer’s role is, in fact, to actively engage in exploring human emotion’s entire realm.

Having water as their elements, Cancerians are the subtlest cardinal sign in terms of expressing their ambition and independence. It is wise, however, not to be fooled – these qualities are as powerful within this sign as they are in the other cardinal signs, regardless of how gentle an outward appearance a Cancerian may project.

Cancer natives are often described as moody by astrologers. While this can at times be true, it somewhat oversimplifies the rich textural nature of people born under this cardinal sign and their ability to accept, embrace or initiate change as and when necessary.

No other sign, with the exception of Pisces, their fellow water sign, matches their capacity for compassion and sympathy and, in spite of their seemingly hard and insensitive exterior, deep down, they are incredibly sensitive and soft.

Endearingly eccentric one moment and insecure about other people’s opinion of them the next; caring and compassionate with lovers, family and friends, yet capable of ever-changing moods and cutting jealous remarks, Cancer natives are often described as ‘bundles of contradiction’. Their wide emotional spectrum means Cancerians generally experience inner lives with lower lows and higher highs than anyone else. They would not have it any other way though, and let’s face it, neither would the rest of us, because at the end of the day, all of this is part of their charm.

In Part 4, we will explore the cardinal quality of air-sign Libra, Autumn’s first sign.

If you would like to know more about obtaining your bespoke Astrology report, please visit my Astrology Shop today.