Epiphany, the Revelation of Christ 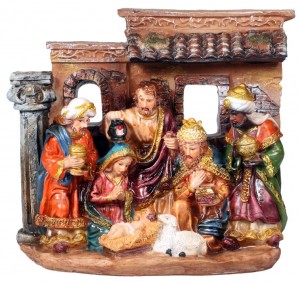 Epiphany falls on the 6th of January and marks the end of the festive season. It is however, more than just the 12th and final day of Christmas. Here is what this day means to devout Christians all over the world.

The Beginning of Epiphany

The Christian feast day of Epiphany originated in the East, where it celebrated Jesus’ birth and his baptism in the River Jordan by John the Baptist. In the 4th Century, Christians in the West also started celebrating the Epiphany. Here, however, it was (and is to this day) also associated with the Wise Men’s visit to the baby Jesus. Having followed a star to find the child in Bethlehem, the three men offered (Matthew 2:11) the child three symbolic gifts:

The word epiphany is derived from the Greek word epiphainein, which means to show, or reveal. It is used to celebrate this visit by the three men because it is said that it was here that Jesus, the revelation of God himself, was first revealed to the world.

In Medieval times, Christmas was celebrated for 12 days. Epiphany, the last day of the celebrations, was given as much significance (right up to the 19th Century) as Christmas Day. Today, Epiphany is celebrated differently by different churches.

In Protestant churches, this day commences the season of Epiphany, which typically extends up to Ash Wednesday, the beginning of Lent (which in turn leads up to Easter). The six Sundays following Epiphany are commonly referred to as the ‘time of manifestation’, with the last Sunday being celebrated as the day of transfiguration, or Transfiguration Sunday.

Other churches, including the Roman Catholic Church, treat Epiphany as a single day, with the following Sundays being regarded as ‘ordinary time’. In some US Catholic dioceses, the Epiphany is marked on the Sunday following the 6th of January., while Orthodox Christians do not celebrate this feast until the 19th of January.

Here are some interesting facts about the Day, or Feast, of Epiphany:

The gift of myrrh not only represented Jesus’ mortality, but also prepared his family for what was to come – his suffering and death by crucifixion.  While I do by no means claim that anything a Psychic Phone Reading can reveal to you will be as profound as this, knowing what lies ahead can help you prepare for the future, too. Give me a call today to learn more.