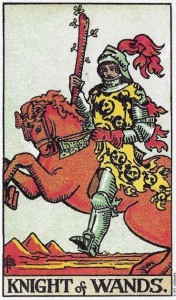 Posted at 05:33h in Blog, Tarot by Tony Hyland
Share

Typically regarded to be a favourable card, the King of Wands may indicate a dark man or countryman (generally friendly, conscientious, honest and married). It may also stand for a good marriage. Reversed (upside down), this card may indicate someone austere, yet tolerant or good, but severe. It may also indicate that advice should be heeded.

This Lesser Arcana card may represent a chaste; friendly, honourable and loving dark woman or countrywoman. If the card adjoining her in a spread indicates a man, she (the Queen of Wands) is well disposed towards him. If the adjoining card also indicates a woman, this woman has an interest in the querent. It may also signify the love of money or a good harvest, which may be interpreted in varying senses.

Reversed, the Queen of Wands may signify something/someone good; obliging, economical or serviceable. It may also indicate goodwill (without the opportunity for this goodwill to be exercised) towards the Queen. Facing upside down, this card may also point towards jealousy; opposition or even infidelity and/or deceit.

This card may signify a departure, change of residence or emigration; an absence, flight or friendly, dark young man. In some readings, it may be a bad card signalling alienation.

Reversed, the Knight of Wands may signify division; discord, interruption or rupture. For a woman, it may also indicate frustration in marriage.

The Page of Wands may indicate a faithful, dark young man; a lover, envoy or postman. It may also indicate a young man in the family seeking a young lady. If placed beside another card indicating a man, this card bears favourable testimony concerning this man. Should the Page of Cups be drawn immediately after this card, the combination may point towards a dangerous rival.

If the Page of Wands is reversed, it may signal announcements, anecdotes or evil news. It may also indicate indecision and associated instability.

As with the cards of the Major Arcana, Lesser Arcana cards are interpreted in accordance with their position within a spread, the order in which they are drawn and, of course, the relevant question/s at hand. The recurrence of specific Lesser Arcana cards in their natural (right way up) and reversed (upside down) positions during a reading also influences interpretations, but we will explore this later.

Reveal a great deal of information about yourself and your past, present and future, full Tarot spreads can be exceptionally helpful. My team includes several highly skilled Tarot readers. Give them a call today to get answers, insights and helpful advice concerning any aspect of your life.