The Chinese Year of the Rooster 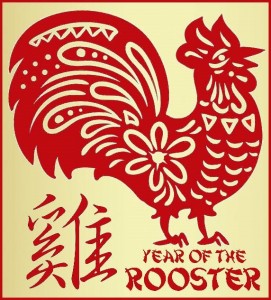 The Year of the Rooster

Chinese astrology regards the Year of the Rooster as the unluckiest year within the12-year cycle. In other words, ‘Roosters’ will find that in the years of their sign, their fortune in every aspect of their lives will not be as favourable as in other years and should subsequently exercise more caution during those years.

Per the Chinese theory of elements, each sign is also associate with one out of five elements, which are: Gold (Metal), Wood and Water; Fire and Earth. Different types of an animal subsequently occur once in every 60-year cycle. The theory is that the characteristics of a person are decided both by the animal sign of the year of their birth and its associated element. Here are the five types of Rooster (birth year, type and specific characteristics):

The Rooster Personality in General

Always appearing beautiful and attractive, they like to be at the centre of attention and are happiest when surround by others, such as, for instance, at social gatherings or parties. Enjoying the spotlight, they will happily exhibit their charm whenever possible.

Boastful and vain, Roosters love to brag about their accomplishments/themselves and can get agitated if others fail to listen to them as expected while they speak. Their continual pursuit of others’ unwavering attention can at times become annoying.

Usually very healthy, those born in the Year of the Rooster tend to be active and enjoy swimming, hiking and other sports. Fighting illness well, they rarely get sick, and if they do, they usually recover quickly. A little sensitive, they do, however, occasionally feel moody and stressed.

More motivated than other Chinese Zodiac animals, Roosters tend to make their careers a major priority within their lives. Multi-talented and hardworking, Roosters can handle a wide variety of jobs, but the best career choices for people born in any given year of the Rooster include:

Loyal and unfailingly true to their word, Roosters make devoted friends who always keep promises. Their tendency to brag about themselves/their accomplishments may, however, make sensitive individuals too uncomfortable to get on well with them. In love relationships, the characteristics of Roosters mean they are most compatible with those born under the signs of the Snake or the Ox. Relationships with people born in the years of the Horse; Pig, Rabbit or Rat are the worst matches.

Like the animal signs of the Chinese Zodiac, the signs of the Zodiac used in Western Astrology can reveal much about a person’s character; their loves and hates; what other signs they are most compatible with, and more. Learn more about loved ones, friends and potential future partners by ordering a Birth Chart & Character Profile now.